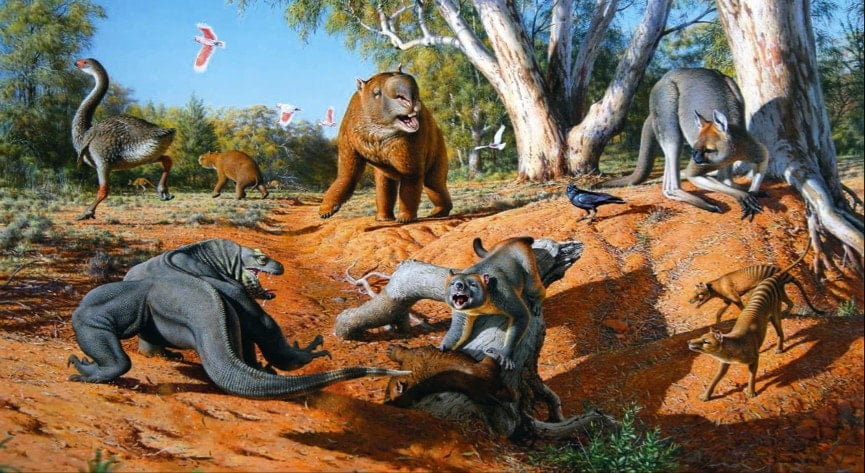 What happened to Australia’s megafauna, the giant animals that once existed across this enormous continent?

A In 1969, a fossil hunter named Rod Wells came to Naracoorte in South Australia to explore what was then known as Victoria Cave. Wells clawed through narrow passages, and eventually into a huge chamber. Its ﬂoor of red soil was littered with strange objects. It took Wells a moment to realize what he was looking at:

the bones of thousands of creatures that must have fallen through holes in the ground above and become trapped. Some of the oldest belonged to mammals far larger than any found today in Australia. They were the ancient Australian megafauna – huge animals of the Pleistocene epoch. In boneyards across the continent, scientists have found the fossils of a giant snake, a huge ﬂightless bird, and a seven foot kangaroo, to name but a few. Given how much ink has been spilled on the extinction of the dinosaurs, it’s a wonder that even more hasn’t been devoted to megafauna. Prehistoric humans never threw spears at Tyrannosaurus rex but really did hunt mammoths and mastodons.

B The disappearance of megafauna in America – mammoths, saber-toothed cats, giant sloths, among others – happened relatively soon after the arrival of human beings, about 13,000 years ago. In the 1960s, paleoecologist Paul Martin developed what became known as the blitzkrieg hypothesis. Modern humans, Martin said, created havoc as they spread through the Americas, wielding spears to annihilate animals that had never faced a technological predator. But this period of extinction wasn’t comprehensive. North America kept its deer, black bears and a small type of bison, and South America its jaguars and llamas.

C What happened to Australia’s large animals is bafﬂing. For years scientists blamed the extinctions on climate change. Indeed, Australia has been drying out for over a million years, and the megafauna were faced with a continent where vegetation began to disappear. Australian paleontologist Tim Flannery suggests that people, who arrived on the continent around 50,000 years ago, used ﬁre to hunt, which led to deforestation. Here’s what’s certain, Flannery says. Something dramatic happened to Australia’s dominant land creatures – somewhere around 46,000 years ago, strikingly soon after the invasion of a tool-wielding, highly intelligent predator.

IELTS WRITING – Rise in the world’s population is the greatest problem... IELTS WRITING – technology is increasing being used to monitor S9AT2 Scroll to top