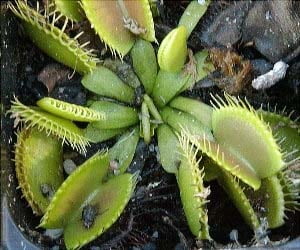 Evolutionist Charles Darwin first marvelled at flesh-eating plants in the mid-19th century. Today, biologists, using 21st-century tools to study cells and DNA, are beginning to understand how these plants hunt, eat and digest

– and how such bizarre adaptations arose in the first place.

A The leaves of the Venus flytrap plant are covered in hairs. When an insect brushes against them, this triggers a tiny electric charge, which travels down tunnels in the leaf and opens up pores in the leaf’s cell membranes. Water surges from the cells on the inside of the leaf to those on the outside, causing the leaf to rapidly flip in shape from convex to concave, like a soft contact lens. As the leaves flip, they snap together, trapping the insect in their sharp-toothed jaws.

B The bladderwort has an equally sophisticated way of setting its underwater trap. It pumps water out of tiny bag-like bladders, making a vacuum inside. When small creatures swim past, they bend the hairs on the bladder, causing a flap to open. The low pressure sucks water in, carrying the animal along with it. In one five-hundredth of a second, the door swings shut again. The Drosera sundew, meanwhile, has a thick, sweet liquid oozing from its leaves, which first attracts insects, then holds them fast before the leaves snap shut. Pitcher plants use yet another strategy, growing long tube-shaped leaves to imprison their prey. Raffles’ pitcher plant, from the jungles of Borneo, produces nectar that both lures insects and forms a slick surface on which they can’t get a grip. Insects that land on the rim of the pitcher slide on the liquid and tumble in. Fatal

C Many carnivorous plants secrete enzymes to penetrate the hard exoskeleton of insects so they can absorb nutrients from inside their prey. But the purple pitcher plant, which lives in bogs and infertile sandy soils in North America, enlists other organisms to process its food. It is home to an intricate food web of mosquito larvae, midges and bacteria, many of which can survive only in this unique habitat. These animals shred the prey that fall into the pitcher, and the smaller organisms feed on the debris. Finally, the plant absorbs the nutrients released.