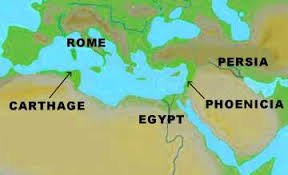 The Phoenicians: an almost forgotten people

The Phoenicians inhabited the region of modern Lebanon and Syria from about 3000 BC. They became the greatest traders of the pre-classical world, and were the first people to establish a large colonial network. Both of these activities were based on seafaring, an ability the Phoenicians developed from the example of their maritime predecessors, the Minoans of Crete.

An Egyptian narrative of about 1080 BC, the Story of Wen-Amen, provides an insight into the scale of their trading activity. One of the characters is Wereket-El, a Phoenician merchant living at Tanis in Egypt’s Nile delta. As many as 50 ships carry out his business, plying back and forth between the Nile and the Phoenician port of Sidon.

The most prosperous period for Phoenicia was the 10th century BC, when the surrounding region was stable. Hiram, the king of the Phoenician city of Tyre, was an ally and business partner of Solomon, King of Israel. For Solomon’s temple in Jerusalem, Hiram provided craftsmen with particular skills that were needed for this major construction project. He also supplied materials – particularly timber, including cedar from the forests of Lebanon. And the two kings went into trade in partnership. They sent out Phoenician vessels on long expeditions (of up to three years for the return trip) to bring back gold, sandalwood, ivory, monkeys and peacocks from Ophir. This is an unidentified place, probably on the east coast of Africa or the west coast of India.

Phoenicia was famous for its luxury goods. The cedar wood was not only exported as top-quality timber for architecture and shipbuilding. It was also carved by the Phoenicians, and the same skill was adapted to even more precious work in ivory. The rare and expensive dye for cloth, Tyrian purple, complemented another famous local product, fine linen. The metalworkers of the region, particularly those working in gold, were famous. Tyre and Sidon were also known for their glass.

These were the main products which the Phoenicians exported. In addition, as traders and middlemen, they took a commission on a much greater range of precious goods that they transported from elsewhere.