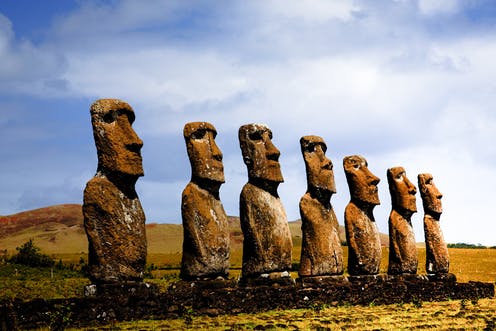 What destroyed the civilisation of Easter Island ?

A  Easter Island, or Rapu Nui as it is known locally, is home to several hundred ancient human statues – the moai. After this remote Pacific island was settled by the Polynesians, it remained isolated for centuries.

All the energy and resources that went into the moai – some of which are ten metres tall and weigh over 7,000 kilos – came from the island itself. Yet when Dutch explorers landed in 1722, they met a Stone Age culture. The moai were carved with stone tools, then transported for many kilometres, without the use of animals or wheels, to massive stone platforms. The identity of the moai builders was in doubt until well into the twentieth century. Thor Heyerdahl, the Norwegian ethnographer and adventurer, thought the statues had been created by pre-Inca peoples from Peru. Bestselling Swiss author Erich von Daniken believed they were built by stranded extraterrestrials. Modern science – linguistic, archaeological and genetic evidence – has definitively proved the moai builders were Polynesians, but not how they moved their creations. Local folklore maintains that the statues walked, while researchers have tended to assume the ancestors dragged the statues somehow, using ropes and logs.

B  When the Europeans arrived, Rapa Nui was grassland, with only a few scrawny trees. In the 1970s and 1980s, though, researchers found pollen preserved in lake sediments, which proved the island had been covered in lush palm forests for thousands of years. Only after the Polynesians arrived did those forests disappear. US scientist Jared Diamond believes that the Rapanui people – descendants of Polynesian settlers – wrecked their own environment. They had unfortunately settled on an extremely fragile island – dry, cool, and too remote to be properly fertilised by windblown volcanic ash. When the islanders cleared the forests for firewood and farming, the forests didn’t grow back. As trees became scarce and they could no longer construct wooden canoes for fishing, they ate birds. Soil erosion decreased their crop yields. Before Europeans arrived, the Rapanui had descended into civil war and cannibalism, he maintains. The collapse of their isolated civilisation, Diamond writes, is a ’worst-case scenario for what may lie ahead of us in our own future’.