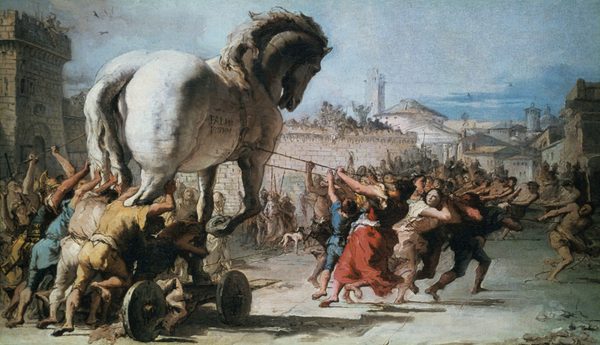 Why was the work of Homer, famous author of ancient Greece, so full of clichés?

A Until the last tick of history’s clock, cultural transmission meant oral transmission, and poetry, passed from mouth to ear, was the principal medium of moving information across space and from one generation to the next. Oral poetry was not simply a way of telling lovely or important stories, or of flexing the imagination. It was, argues the classicist Eric Havelock, a ‘massive repository of useful knowledge, a sort of encyclopedia of ethics, politics, history and technology which the effective citizen was required to learn as the core of his educational equipment’. The great oral works transmitted a shared cultural heritage, held in common not on bookshelves, but in brains. In India, an entire class of priests was charged with memorizing the Vedas with perfect fidelity. In pre-Islamic Arabia, people known as Rawis were often attached to poets as official memorizers. The Buddha’s teachings were passed down in an unbroken chain of oral tradition for four centuries until they were committed to writing in Sri Lanka in the first century B.C.

BThe most famous of the Western tradition’s oral works, and the first to have been systematically studied, were Homer’s Odyssey and Iliad. These two poems – possibly the first to have been written down in the Greek alphabet – had long been held up as literary archetypes. However, even as they were celebrated as the models to which all literature should aspire, Homer’s masterworks had also long been the source of scholarly unease. The earliest modern critics sensed that they were somehow qualitatively different from everything that came after – even a little strange. For one thing, both poems were oddly repetitive in the way they referred to characters. Odysseus was always ’clever Odysseus’. Dawn was always ‘rosy-fingered’. Why would someone write that? Sometimes the epithets seemed completely off-key. Why call the murderer of Agamemnon ‘blameless Aegisthos’? Why refer to ‘swift-footed Achilles’ even when he was sitting down? Or to ‘laughing Aphrodite’ even when she was in tears? In terms of both structure and theme, the Odyssey and Iliad were also oddly formulaic, to the point of predictability. The same narrative units – gathering armies, heroic shields, challenges between rivals – pop up again and again, only with different characters and different circumstances. In the context of such finely spun, deliberate masterpieces, these quirks seemed hard to explain.

IELTS READING – The rise of the agribots S8AT2 IELTS WRITING – The changes that have taken place at West park Secondary... Scroll to top