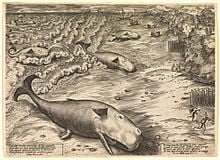 Why do whales leave the ocean and become stuck on beaches?

When the last stranded whale of a group eventually dies, the story does not end there. A team of researchers begins to investigate, collecting skin samples for instance, recording anything that could help them answer the crucial question: why? Theories abound, some more convincing than others.

In recent years, navy sonar has been accused of causing certain whales to strand. It is known that noise pollution from offshore industry, shipping and sonar can impair underwater communication, but can it really drive whales onto our beaches?

In 1998, researchers at the Pelagos Cetacean Research Institute, a Greek non-profit scientific group, linked whale strandings with low- frequency sonar tests being carried out by the North Atlantic Treaty Organisation (NATO). They recorded the stranding of 12 Cuvier’s beaked whales over 38.2 kilometres of coastline. NATO later admitted it had been testing new sonar technology in the same area at the time as the strandings had occurred. ‘Mass’ whale strandings involve four or more animals. Typically they all wash ashore together, but in mass atypical strandings (such as the one in Greece), the whales don’t strand as a group; they are scattered over a larger area.

For humans, hearing a sudden loud noise might prove frightening, but it does not induce mass fatality. For whales, on the other hand, there is a theory on how sonar can kill. The noise can surprise the animal, causing it to swim too quickly to the surface. The result is decompression sickness, a hazardhuman divers know all too well. If a diver ascends too quickly from a high-pressure underwater environment to a lower-pressure one, gases dissolved in blood and tissue expand and form bubbles. The bubbles block the flow of blood to vital organs, and can ultimately lead to death.

Plausible as this seems, it is still a theory and based on our more comprehensive knowledge of land-based animals. For this reason, some scientists are wary. Whale expert Karen Evans is one such scientist. Another is Rosemary Gales, a leading expert on whale strandings. She says sonar technology cannot always be blamed for mass strandings. “It’s a case-by-case situation. Whales have been stranding for a very long time – pre-sonar.” And when 80% of all Australian whale strandings occur around Tasmania, Gales and her team must continue in the search for answers.

IELTS WRITING – students did a university degree, they tended to study... IELTS WRITING – Southland’s main exports in 2000,2019,and future... Scroll to top