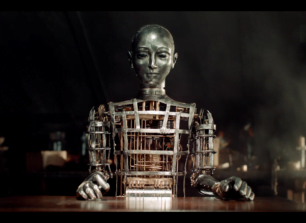 A brief history of automata

An automaton is a machine, usually made to resemble a person or animal, that operates on its own, once it has been started. Although few are constructed nowadays, they have a history stretching back well over two thousand years. Several myths show that the ancient Greeks were interested in the creation of automata.

In one, Hephaestus, the god of all mechanical arts, was reputed to have made two female statues of pure gold which assisted him and accompanied him wherever he went. As well as giving automata a place in mythology, the Greeks almost certainly created some. These were probably activated by levers and powered by human action, although there are descriptions of steam and water being used as sources of power. Automata were sometimes intended as toys, or as tools for demonstrating basic scientific principles.

Other ancient cultures, too, seem to have developed automata. In Egypt, Ctesibius experimented with air pressure and pneumatic principles. One of his creations was a singing blackbird powered by water. A Chinese text of the third century BC describes a: life-size, human-shaped figure that could walk rapidly, move its head up and down, sing and wink its eye.

Much later, Arab engineers of the ninth and thirteenth centuries wrote detailed treatises on how to build programmable musical fountains, mechanical servants, and elaborate docks. A ninth-century ruler in Baghdad had a silver and gold tree with metal birds that sang. The art of creating automata developed considerably during the fifteenth century, linked with improvements in dock making: the mechanisms of automata and clocks had a great deal in common. Some truly remarkable automata were produced at this time. Muller was reputed to have made an artificial eagle which flew to greet the Emperor on his entry into Nuremberg, Germany, in 1470, then returned to perch on top of a city gate and, by stretching its wings and bowing, saluted the emperor on his arrival. Leonardo da Vinci made a lion in honour of the king of France, which advanced towards him, stopped, opened its chest with a claw and pointed to the French coat of arms.

Automata were normally very expensive toys for the very rich. They were made for royal or aristocratic patrons, to be viewed only by themselves and selected guests – who were expected to be impressed by their wealth. Automata were also created for public show, however, and many appeared on clock towers, such as the one in Bern, Switzerland, built in 1530.