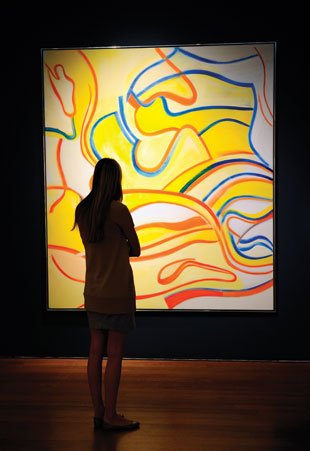 An emerging discipline called neuroaesthetics is seeking to bring scientific objectivity to the study of art, and has already given us a better understanding of many masterpieces. The blurred imagery of Impressionist paintings seems

to stimulate the brain’s amygdala, for instance. Since the amygdala plays a crucial role in our feelings, that finding might explain why many people find these pieces so moving.

Could the same approach also shed light on abstract twentieth-century pieces, from Mondrian’s geometrical blocks of colour, to Pollock’s seemingly haphazard arrangements of splashed paint on canvas? Sceptics believe that people claim to like such works simply because they are famous. We certainly do have an inclination to follow the crowd. When asked to make simple perceptual decisions such as matching a shape to its rotated image, for example, people often choose a definitively wrong answer if they see others doing the same. It is easy to imagine that this mentality would have even more impact on a fuzzy concept like art appreciation, where there is no right or wrong answer.

Angelina Hawley-Dolan, of Boston College, Massachusetts, responded to this debate by asking volunteers to view pairs of paintings – either the creations of famous abstract artists or the doodles of infants, chimps and elephants. They then had to judge which they preferred. A third of the paintings were given no captions, while many were labelled incorrectly -volunteers might think they were viewing a chimp’s messy brushstrokes when they were actually seeing an acclaimed masterpiece. In each set of trials, volunteers generally preferred the work of renowned artists, even when they believed it was by an animal or a child. It seems that the viewer can sense the artist’s vision in paintings, even if they can’t explain why.

Robert Pepperell, an artist based at Cardiff University, creates ambiguous works that are neither entirely abstract nor clearly representational. In one study, Pepperell and his collaborators asked volunteers to decide how’powerful’they considered an artwork to be, and whether they saw anything familiar in the piece. The longer they took to answer these questions, the more highly they rated the piece under scrutiny, and the greater their neural activity. It would seem that the brain sees these images as puzzles, and the harder it is to decipher the meaning, the more rewarding is the moment of recognition.